Along the balcony overlooking the Turbine Hall in London's Tate Modern, a group of people are stood watching the space below. This in itself isn't surprising - the balcony is a commonly used vantage point for finding lost friends and for people-watching. But there is something noticeably different about the dynamic between the bodies in the Turbine Hall; something out-of-the-ordinary about the way that they move and interact. Whilst some of the figures below appear to be making a more routine visit to the gallery, others amongst them have different intentions: they clumsily dance around one another, stopping and starting, lightly jogging in different directions, without any immediately evident pattern. Their individual journeys begin to synchronise, and all at once a mass of these people are speeding toward the main entrance. They pause and run back down the slope. 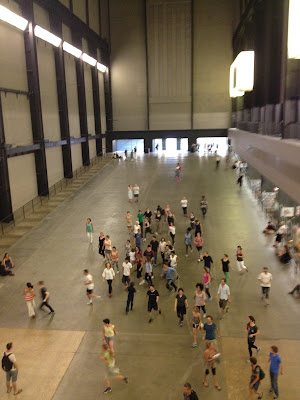 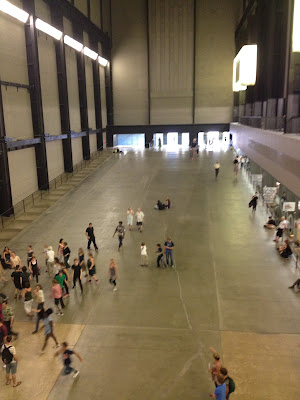 This is Tino Sehgal’s These Associations, a piece developed in response to the Turbine Hall commission. A group of people – it is unclear how many – perform a choreographed piece in the public space. They have no costumes and no stage, and there is no clear distinction between performers and audience. Sometimes they move with purpose, other times apparently randomly, as free agents. (This reminded me of how Carolee Schneeman had described in her talk at Summerhall how dancers had always been to her 'like particles of energy in space’). They don’t talk, and their faces are impassive. Watched from above, the rhythms and patterns made between their bodies are like those of rippling water, or shoals of fish. The runners’ mass exodus up and down the slope is like the sea tide; at points, participants run circles around visitors, catching them in a whirlpool of bodies.

Each of the ‘performers’ are in their own clothes. As they jogged past, I recognised one among them as the man who shared my bench outside the gallery while we both separately ate our supermarket lunches. A lunch break for Sehgal’s artwork. How easy it must be for these people to break themselves off from piece and melt into the regular crowd - their status is defined by their behaviour only. The work probes our definitions of identity and the division between art and audience.

At one point an intermixed crowd of performers and viewers gathers at the base of the main slope. They chant, then sing. WE HAVE CHANNELLED CHANNELLED CHANNELLED CHANNELLED THESE FORCES INTO THE WORLD WE HAVE CHANNELLED THESE FORCES INTO THE WORLD. Their voices rise in the gallery space to an echoing, glorious crescendo before stopping abruptly. Slowly, figures pick themselves from the main group. On either side of me were two men – each were approached by a figure from the group and apparently launched into a one-way conversation. The woman to my left spoke closely and intimately to her chosen listener; on my right a girl in her twenties plunged into her own story: ‘It was the end of the bread, you know? So I thought, okay, it’s night-time, and I wanted it toasted yeah? I found some jam, spread it on thick, thick layers right? And it was like, the most satisfying thing’. While they are talking, the others slowly walk backwards into the dimly lit opposite end of the Turbine Hall, having divulged their own strange secrets to members of the public. 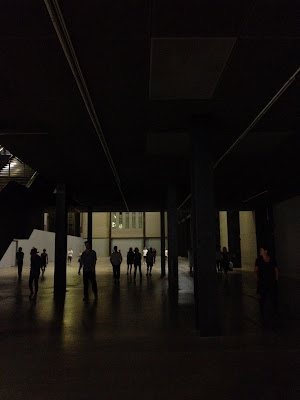 Adrian Searle has described in The Guardian how, during this brief moment of confession, the dynamic is changed between himself and these people, before ‘they’re off again’. But I think that this feeling isn't restricted to this one moment; the dynamic changes as soon as we recognise the figures as behaving differently to ourselves. We notice them properly. We scrutinise our co-inhabitants of the Turbine Hall to discern whether or not they are part of the piece. Something in wanting to connect with and understand the people around us shifts to the positive.

For this, Sehgal’s piece is remarkably successful in its reinvigoration of the social dynamic of the space and the way in which it encourages us to look again at each other, and at ourselves. Sehgal has requested specifically that there be no ‘explanatory’ text or literature for the piece, ostensibly in an effort to keep it as ‘live’ as possible and retain focus solely on social connections in the present. In this, the artist has set up a situation and departed from it – one thing you don’t want to ask the people involved is ‘What’s it like working with Tino Sehgal?’ – instead ‘What’s your story?’ and ‘How did you get involved in this?’.

The artist is giving a talk at the gallery on Saturday 6th October, in conversation with Tate curator Jessica Morgan. I am tempted to go but doubt the artist will enlighten us to anything that would change or ameliorate a direct experience of These Associations. The work will be in the gallery until 28th October. I'll definitely be back.

Posted by florence ritter at 10:31