Galleries, studios and department stores across London have this week opened their doors to showcase and celebrate cutting-edge contemporary design, under the scarlet banner of London Design Festival 2012. From futons to footwear and armchairs to chocolate, nothing is left untouched by LDF’s comprehensive programme of events. Masterful combinations of aesthetics and utility are to be found in exquisitely manufactured items all over the city (my personal favourite can be found here). But design of course can be extended beyond cherished objects to things more perishable and even...consumable.

Food designer Linda Monique has created a banquet to be served up in four courses in different locations in the Andaz Hotel this week. The dishes are visually spectacular, with colours and compositions as exquisitely balanced as anything you might expect to be served from the menu of the five-star hotel. But this is dining with a difference. Each course has been made up of ‘scraps’: products habitually thrown away by the Andaz kitchens. Rinds, yolks, crusts, pumpkin skin and even bones are among the peculiar ingredients used. Even the accompanying wine would usually be ‘scrapped’, coming from bottles with damaged labels which by law cannot usually be served.

I met Monique in Andaz’s dazzling 1901 restaurant to discuss the Scrap Lab project over one of her delicately decadent Club Sandwiches. Monique is extremely well turned out, well-mannered and well-versed in presenting her work. In her own typically succinct articulation, she hopes to find and promote ‘innovative ways of re-using products and making iconic dishes’ whilst also ‘showcasing issues surrounding laws and institutions’. 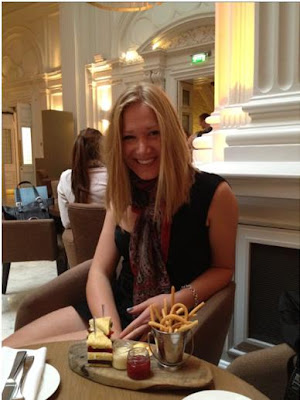 As the press release for Scrap Lab promised discussion on food sustainability ‘throughout the evening’,  I was under the impression that Scrap Lab could be understood as a type of food-debate-performance project – like one of Rirkrit Tiravanija's home-cooked dinners, without the wanky art elite and with a prerogative to spark discussion on a particular issue. But Monique rebuffs terms like ‘eco’ and ‘sustainability’ seeing them to be ‘used in vain in so many instances’. Scrap Lab should be seen more as a business plan than an artwork. Asked whether this was a project which she hoped to initiate in other restaurants and institutions, Monique replied instantly ‘very much so’ only then admitting ‘it does take a long time to understand institutions and to redefine the ways they use food’. A long but worthy process if it begins to affect corporate and institutional approaches to food and wastage. 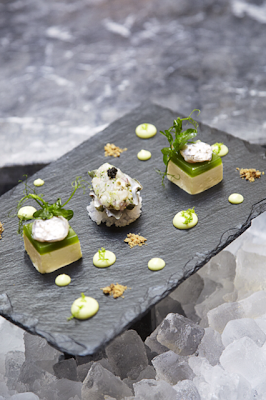 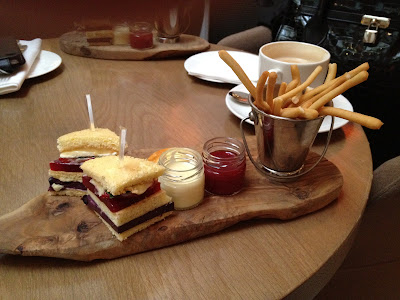 Monique’s Club Sandwich, in a lively twist on the British classic, is in fact served as a dessert, with thin slices of sponge sandwiching blueberry mousse, mint and strawberries. Served with a portion of thin doughnut ‘fries’ and raspberry and white chocolate ‘ketchup’ and ‘mayonnaise’.

If fish heads and marinated ribs don’t appeal, around the way on Baldwin Terrace, Studio Toogood are host to another food design project: the M25 Luncheon, a project from Milan-based experimental food designers Arabeschi di Latte. The concept is relatively simple – of the menu of four re-vamped Ploughman’s lunches, all of the products are sourced from within the M25. Each menu is based around a different combination of chutney and cheese, accompanied by a couple of other handsome ingredients such as smoked salmon, a pickled egg, or a drippingly syrupy cube of honeycomb. All are artfully arranged on a slab on concrete and to be eaten off your knees. 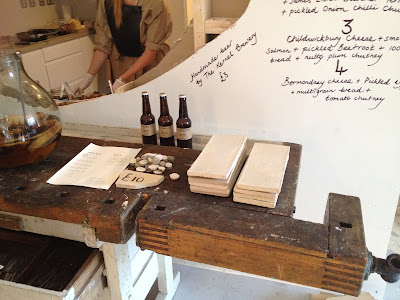 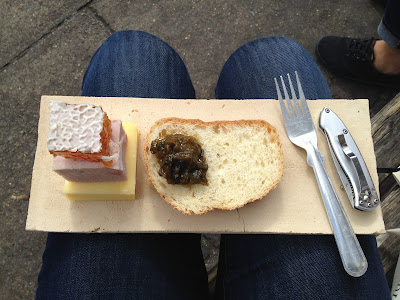 MENU 1: Cheddar cheese + honey comb (from a hive on the roof of an ex-council block in Tower Bridge)
+ ham + white London bread + pear and walnut chutney 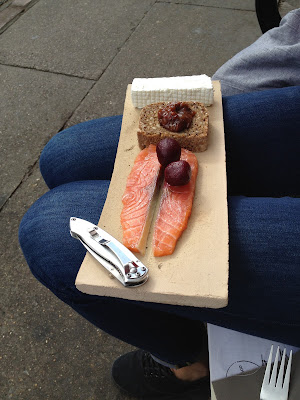 Both my friend and I kept repeating ‘it’s delicious…this is really good…that was delicious’ to sort of compensate for the fact that we had essentially each spent a tenner on a piece of cheese on a piece of rock. It’s a particularly ‘trendy’ approach to food with its à la mode local sourcing and contemporary/rustic design, but it does make for a different dining experience. The ploughman's lunch feels oddly bespoke, unique, something made for you personally. M25 Luncheon even has its own ‘scrap’ element as the chutneys are made from surplus market fruit and vegetables before they are discarded.

Both Scrap Lab and M25 Luncheon make us think through food, using rituals of conviviality with a greater purpose to increase our attention to where the food came from, not just where it’s going. Food design to change your thinking. 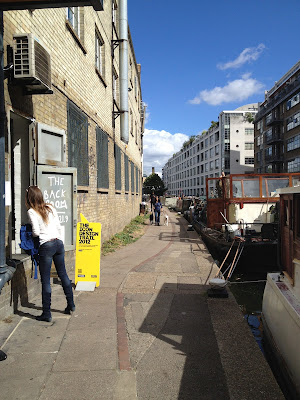 Lunch on the canal - the back entrance to Studio Toogood

Linda Monique’s installation Eggcentric can be seen at the Andaz Hotel, Liverpool Street. She is currently negotiating with Andaz to have her delectable club sandwich become a permanent fixture on the restaurant menu.

Arabeschi di Latte do some really fantastic projects, more about which can be found here.

Posted by florence ritter at 14:47