Down in the secret underbelly of the Andaz Hotel in London Liverpool Street, in an ornately decorated 1920s Masonic temple, there is a small, glossy cabinet housing a hologram. The palm-sized flickering decagon of colour is certainly eye-catching, but more interesting is what it symbolises: things both physically and infinitely bigger than itself. It is a miniature interpretation of P R I S M, Keiichi Matsuda’s new creation at the V&A for the London Design Festival. On Thursday night, over scallops and champagne in the turquoise-ceilinged, candlelit hideaway at Andaz, we heard about Matsuda’s new work, virtual realities, and the opportunities that might arise from making the immaterial material and the invisible visible. 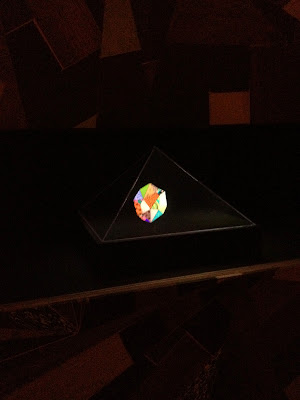 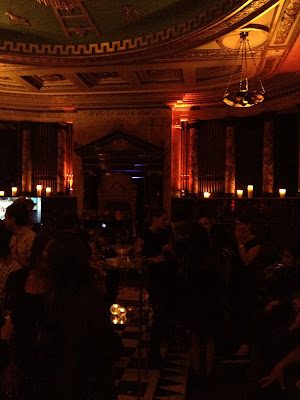 P R I S M offers an alternative portrait of London as a virtual city defined by the digital world of data. Intersecting aluminium frames contain irregularly-shaped paper screens, onto each of which is projected a different, moving pattern. The patterns change according to a live feed of information: the touching in and out on an Oyster card, the hiring out of Boris bikes, weather conditions, even energy usage in residential homes. Londoners, commuters and tourists alike constantly contribute to how the installation might look at any given moment. Even 10 Downing Street is under this silent scrutiny: ‘if the Prime Minister switches on the kettle’ says Matsuda ‘the design will be altered’. Matsuda’s project makes visible the ever-watchful agents of data-collection. ‘This is really plugged into London…its eyes and ears are all over the city’.

Undoubtedly, P R I S M is visually impressive but its concept is more than a little unnerving. I questioned Matsuda on the sense of unease generated by his aestheticised data-show: was it really something to celebrate, this constant monitoring of our actions? Certainly this was one of his less critical works, he admitted, but through lending the immaterial world a certain materiality he hoped to open a platform for discussion about how this data might be presented and used. Matsuda compared this to the writing of elegant code; his work embraces ‘a new kind of craft’, in using a new set of tools to imagine what the city could be.

I appreciate that P R I S M tackles a significant contemporary issue in a visually impressive way, but wonder whether it could be more explicitly critical. At Thursday’s satellite event to the main exhibit we were shown a promotional video of the work’s construction which, with its speeded-up footage of commuters and up-beat music, seemed to present the project as an exciting vision for the future rather than as a comment on the present, as seems to have been Matsuda’s intention. Scary stuff. 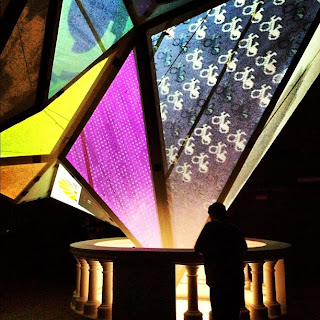 Posted by florence ritter at 19:03