So Tate Modern’s Damien Hirst exhibition, the highest-grossing show in the gallery’s history, has finally closed this weekend. Its assortment of mindlessly executed spot- and spin- paintings, its farm-full of petrified animals-in-formaldehyde, its fancy-coloured pills and fag ends – all will be dispersed and shipped back to their investment-savvy collectors.

I felt almost physically ill as I made my way through the rooms of the exhibition. Not so much at the turgid pink sausages preserved and suspended in their glass frame, nor even at the skinned cow’s head sitting in a pool of its own thick blood, swarming with flies. What was really stomach-turning about the show was the resounding vacuity of the works of display and the inescapable image of Hirst sniggering at his trusting public who were compliantly searching for ‘meaning’ in this vapid artwork.

One particularly nauseatingly pretentious work was ‘Crematorium’, a large-scale ceramic ashtray full of cigarette butts, which Tate hopefully describes as ‘a contemporary memento mori of the inevitability of death.’ Elsewhere in the exhibition a wall-blurb informs us that the making-process of Hirst’s Spin Paintings ‘allows him to exercise some distance in their execution’. As if Hirst is no less distant from his animals immortalised by someone else, his Spot Paintings painted by someone else and his bejewelled skull encrusted by - someone else. 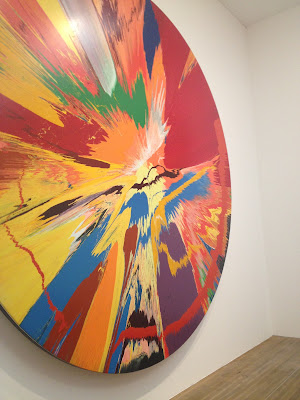 With the launch of the new live art/installation space The Tanks, Tate have set up some keynote questions, one of which is ‘How Can Art Change Society?’. I would be interested to know how Tate might argue that this exhibition could provide any useful fodder for this debate. In anticipation of the 2012 Olympics, when London would be inundated by visitors from all over the world, Tate might have taken the opportunity to showcase new or up-and-coming (young) British artists, or taken pains to bring attention to less visible issues. Instead they capitalised on the hugely expanded international audience, selecting a shamelessly money-grabbing artist though what we can only imagine were their own similarly financially-driven motivations. I hope the capital generated by this show will be injected into projects that have a little more depth and take a better shot at ‘changing society’. 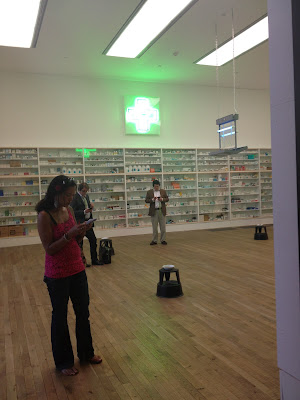 Visitors to the exhibition seemed to struggle to connect with Hirst's installations directly.

Posted by florence ritter at 23:59