Dovecot Studios is celebrating a century of tapestry production with their current exhibition Weaving the Century: Tapestry from Dovecot Studios 1912-2012. Although the location on Infirmary Street has been open for four years as an exhibition space, it has kept a relatively low profile. With this vibrant show the gallery is sure to put itself firmly on the map, whilst raising the profile of contemporary tapestry and the art of tapestry weaving.

Jonathan Cleaver, a weaver at the Studios, was kind enough to show me around the working space which viewers are able to see as part of the exhibition. He offered a little background to the process of weaving and to some of the commissions that are currently underway. 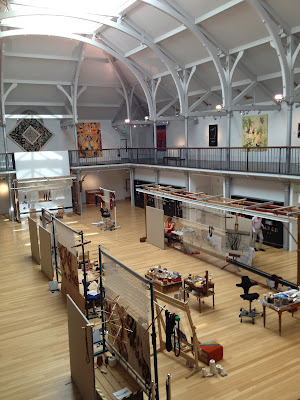 The exhibition runs along the balcony; visitors can see the weavers at work in the central space

One such work-in-progress is a tapestry of a work by painter Victoria Crow. It is the second opportunity the Studio has had to collaborate with the artist; their first can be seen on display in the exhibition in its finished form. Both designs are from Crow’s series A Shepherd’s Life which takes scenes of the life of farmer Jenny Armstrong. The series is remarkable in itself (more information on the project can be found here); its woven counterparts well demonstrate the capacity of tapestry to lend further dimension to an artwork.

This particular tapestry is entirely composed of undyed British wool. It has proved relatively difficult to source, Jonathan admits, as it is a case of finding sheep of the right colour. Most of the wool comes from the Shetlands, although some has been taken from the royal sheep at Highgrove Estate, Prince Charles’ country home, and some from fleeces hand-spun in the Borders. The sheep farmer who took over Jenny’s farm after her death has even donated some black wool from her current flock. There is something wonderfully poetic about the different wools from sheep across the UK coming together to be woven into this effigy to a sheep farmer. The materials themselves have stories of their own. 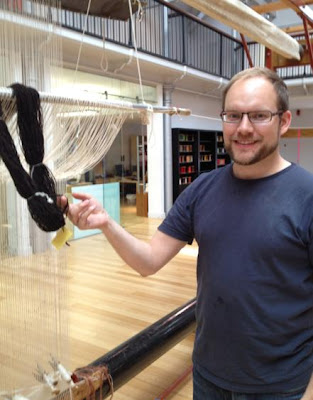 
The Crow tapestry is being carried out by master weavers David Cochrane and Naomi Robertson. When collaborating on a tapestry, as Jonathan explains, it is very important to have a good understanding of how the image is to be interpreted, in order to work coherently together. The transition of a design to tapestry is far from mechanical and depends greatly on the individual’s decisions throughout the process. The design is traced and enlarged into a full-scale linear ‘cartoon’, which is pressed up against the warps, or vertical threads, for a basic imprinted outline. As Dovecot Studios very rarely give direction to their weavers regarding colour, this simple line drawing is the only guide available to the weavers and all of the colour mixing is done by eye, producing works that are ‘more responsive, richer and more sensitive’. If a fault is identified, or a change is to be made, the entire line has to picked out and restarted from that point. ‘Weavers learn quickly not to make mistakes through the process!’ Jonathan laughs.

The tapestries can take months to complete, and can become a big part of the weaver’s life during that time. The studio has developed something of a ceremony for the moment of cutting the finished piece from the loom: ‘we even use gold-coloured scissors…you want to mark it in some way’.

Between them, Dovecot Studios’ master weavers David and Naomi have accumulated around forty years of experience. Does Jonathan see himself continuing for a similar length of time? He smiles: ‘every project is new, each poses a new challenge’. Weaving the Century is testament to the extraordinary variety of works produced and viewers are given a chance to see what tapestry is capable of. A stunning exhibition that cannot be missed, it should be part of any trip to the Edinburgh Art Festival this summer. 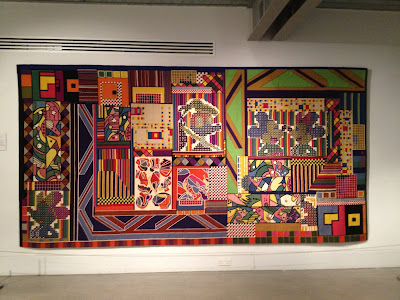 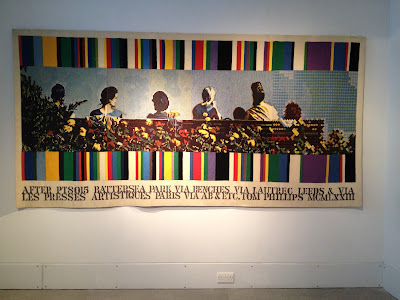 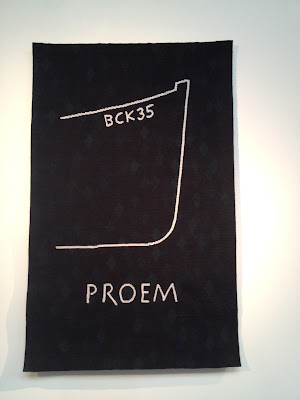 Posted by florence ritter at 11:42