Realising I knew relatively little about Hockney’s recent work, or really anything beyond his Californian splash paintings, I went to David Hockney: A Bigger Picture, an exhibition at the Royal Academy earlier this year. A long, snaking queue of patient and impatient Londoners and tourists, which ran out of the entrance doors and halfway into the gallery’s stately courtyard, gave a good idea of the considerable media attention attracted by the show.

The exhibition opens with four paintings from the late 1990s, each treating the same country scene at four different seasonal points in the year. Three large trees dominate the relatively simply composition, with a small road in the bottom left corner and a grassy slope to the right. Standing before the summer version of this view me and my dad agreed that although there were certain pleasing and evocative details to the painting - the shading under one of the trees creating an inviting glen, the road adding a subtle sense of narrative  - the different elements in the composition were treated in such a way that they did not complement one another or combine to make a complex and evocative landscape so much as sit starkly beside one another without visual coherence or communication.

Unfortunately, I found this to be the case with several of Hockney's landscapes shown at the RA exhibition. Many among them appeared to be studiously 'different' or unconvincing in their use of colour, like artistic experiments which might perhaps had been better left in the studio. Some among them were notably more effective than others however: Hockney’s Woldgate Woods series for example included some particularly effective pieces with some excellently and beautifully rendered light effects.

However, what was of special note in this exhibition was its marking of a recent and striking change to the artistic process of the contemporary painter: rather than sketching in books and on paper, Hockney uses an iPad to record his impressions of the landscape. What does this mean for artistic practice in the future, more particularly, for the future of painting? Following the development of photography and cinema, the mimetic function of painting at least was superseded, if its quality and value as a means of expression was not, perhaps, rendered obsolete. But what does it mean when the painter’s customary processes are implemented through screen-based media and comparable painterly effects are achieved?  A few days previously to seeing the show I had visited my aunt, who herself has recently acquired an iPad. Certainly drawing on it is not easy, and requires skill. But then again, erroneous marks can be instantly erased; compositions saved, effortlessly transported and returned to; different hues tried out and rejected without trace of their ever being there. Whereas the RA put little emphasis on the use of this medium (the final iPad sketches were blown up and displayed on the gallery walls so that they were only distinguishable from paintings through a closer examination of the thickness of the supports), clearly, an entirely different process is involved.

Sketchbooks (real, tangible sketchbooks of card and paper) were displayed on screen with a rather tacky page-turning graphic which took the viewer through the pages. Although the alternative can be irritating – to see only one selected page of a sketchbook that is tantalisingly inaccessible in its glass case – I wondered what exactly I was looking at up on the screen. Certainly more information was given, but is that all we need from an exhibition? If we are provided only with screened content, why come to the show in the first place? The reproduction of his sketches as seen on the screen in the exhibition might only be minutely different to their reproduction on our laptop or computer screens at home. The ‘art object’ of the sketchpad, through its digitalisation, is transformed into a sort of tablet through which drawings pass but do not reside: a new way in which technology might question our conceptions of the medium of painting. As such, the exhibition had the potential to open wider debate and critical reflection on the convergence of painting and new technologies, which I felt the curators of the show could have exploited further, rather than focussing as they did on the artist’s attachment to landscape. 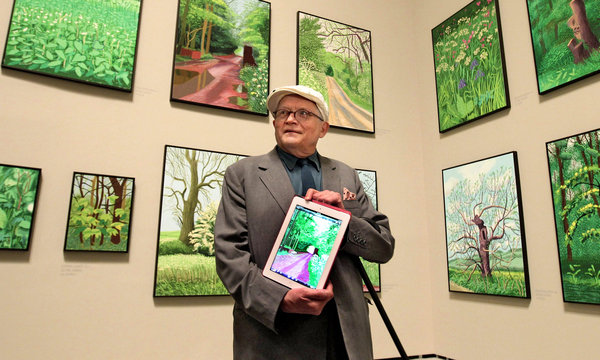 Posted by florence ritter at 23:53