Margate gives new meaning to run down. Certainly it has some little pockets of interest and humour - a friendly sweet shop, amusing graffiti, a better slush puppy than I've had in years - but the rest is crumbling arcades, scaffolding on the sand, and kebab houses close to extinction. Yet Turner Contemporary's current exhibition Tracy Emin: She Lay Down Deep Beneath The Sea
has aided Margate's transformation into an art student's pilgrimage destination. 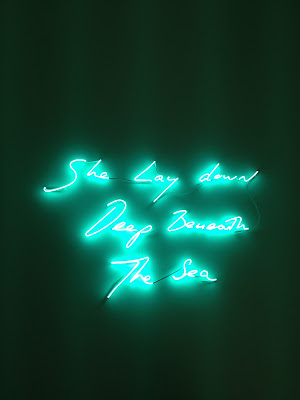 Emin's recent work, at least as it is represented by the curators at Turner Contemporary, displays little deviation from well established Emin-branded themes of sex, desire, raw emotion. There is an almost obsessive repetition of certain corporeal positions and specific forms - a reclining female for example returns again and again in various formats. The shape is a curious one to fixate on: it is tempting to imbue the languid female with idea of longing, apathy, desperation, but the laying out of the body is also something of a standard pose in a life drawing class - Emin plays with angles and media to reinvigorate the form. Of greatest interest is the transformation of her famous swiftly executed, stark monoprints into streaks of embroidery. Luxuriously thick black thread is carefully looped onto canvas in undulating, swelling and thinning lines that mimic the naturally uneven thickness of lines drawn in ink. This transition is interesting because it retains the aesthetic of the monoprint and is therefore surprising: on approaching the wall based pieces, the viewer discovers something unexpected about its manufacture. 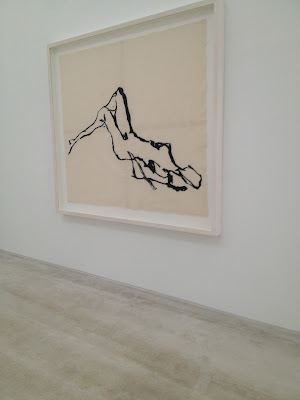 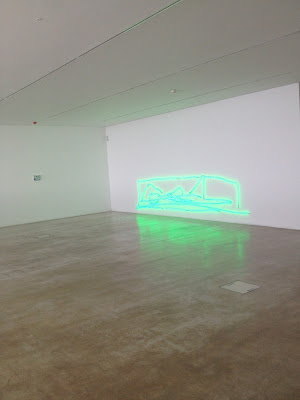 Where the exhibition falters somewhat is its clunky comparison of Emin's pieces with erotic content discovered in works by Turner and Rodin. There seems little reason to make such a link but for Turner's and Emin's shared personal connection to Margate and the fact that the gallery has temporarily acquired Rodin's Kiss for the entrance hall. It is conceded in the exhibition catalogue that the artists come at the eroticised female nude from opposite standpoints, but the drawing together of these works adds so little to either that it is easy to be suspicious of its motivations as convenience, crowd pleasing tactics or ticking boxes.

Nevertheless, it is certainly something to see these big names in such a place as Margate. The bleached floors and large bright windows of the gallery make for a starkly different environment to that which stagnates outside, desperately awaiting its promised renovation. 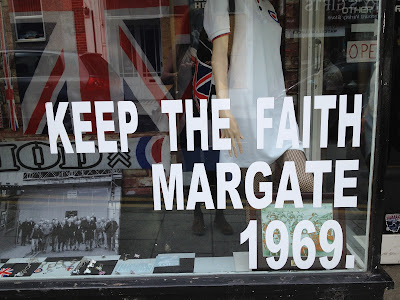 Posted by florence ritter at 10:18