The Whitechapel Gallery have recently opened their doors to spectacular new exhibition Mel Bochner: If the Colour Changes. Last week I was lucky enough to be accepted onto a small seminar at the gallery, which included a preview of the show before a Q&A session with the seminal conceptual artist.

The exhibition includes pieces from the 1960s to work made this year. ‘Once you recognise that my work is an analytical attempt to rethink painting’s meanings and functions,’ Bochner writes in the foreword to the exhibition catalogue, ‘you realise that it is all one continuous investigation’. But it isn’t only painting he investigates. Over an illustrious career of nearly half a century, Bochner has returned again and again to unpick the various systems of representation that we rely on in trying to make our world comprehensible. Using different media, or ‘delivery systems’ as he terms them, Bochner layers, juxtaposes, or combines these systems; cancelling or disrupting their legibility, and questioning their reliability. 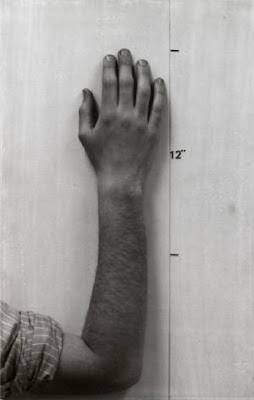 
In a formative early work, Bochner took a photograph of his arm. Recognising that in photography, ‘there is no mechanism to say what size anything is’, he placed his arm next to a line marked with a length of twelve inches. But the verifying measurement in the photograph is impossible to verify in its photographic reproduction; what is more, it is of course now false. How are we to know if it was correct in the first place? This was the last photograph Bochner ever made, but it had a decisive effect on his work as he began to consider the relationship between measurement and belief.

Three decades later, in 1998, Bochner would make Event Horizon: a series of differently coloured canvases carefully aligned across a wall, inscribed with various horizontal measurements. Bochner related how a ‘very important’ German reviewer had walked out of an exhibition of Event Horizon, furious about the artist’s use of imperial measurements. He took out a metric tape measure and exclaimed angrily, ‘But I can’t measure it! How do I know the dimensions are correct?’ Although Bochner lost the much-coveted review, he delighted in this, the ‘perfect’ response to the work: ‘[the reviewer] was seeing it as pure meaning...he realised that measurements were built on trust. At that moment, I got into his head. That’s got to be a good thing’.

Many critics are keen to situate Bochner’s work in the 1960s ‘period of doubt’, a questioning of the claims made for painting as a vehicle for ‘truth’ of the psyche of the individual (Abstract Expressionist) painter, further expanded to question the ‘truth’ or objectivity of accepted systems of measurement and communication. I asked Bochner what he felt about this. Did the realisation that we had only belief in, not knowledge of, established systems have to be ‘momentarily chilling’ (Weiss) or induce a ‘nauseating vertigo’ of uncertainty (Borchardt-Hume)? Or, could his work in fact be understood as a neutral or even celebratory reflection on the communal systems we have set up around ourselves in order to better communicate with one another?

Bochner’s response to this was evasive, and somewhat unsatisfactory. ‘I don’t listen to what critics say about my work, in case it changes how I feel about it,’ he replied; then, laughing, ‘but I’m not as good natured as I’m appearing!’

This was Bochner’s response to many of the more probing questions of the afternoon. He’d start: ‘well, I’m not sure about that, but...’ and then go on to tell a relevant anecdote from his career history. At first I found this frustrating – why wouldn’t he engage us in these debates? His regular retreat to these simple stories and events seemed to be totally at odds with the deeply philosophical nature of his work. But Bochner’s refusal to reveal his own interpretations of his work is a manoeuvre to regale any notion that his ideas should be any more valid than anyone else’s, and to have his work speak for itself, rather than serve as an intermediary for the artist’s expression.

This resistance to ‘self-expression’ is seen again in Bochner's thesaurus paintings, where he ‘lets the language speak for itself…without interference’. In these works, Bochner uses Roget’s Thesaurus to generate colourful word chains. The language deteriorates as the eye follows the text downwards, as the terms become increasing colloquial and often vulgar: ‘I start with a formal, neutral word’ Bochner explained, ‘and let it fall apart’. The language is active, and the paintings almost performative – whether spoken out loud or read silently the words and phrases seem to have a voice of their own. And yet of course we imagine or project the tone of this voice through our own associations.

Language systems, like measuring systems, are in Bochner's work revealed as fallible, and subjective: ‘That language is a direct conduit to thought, short-circuiting emotion: this is a fallacy. Language is not transparent; it is full of ideologies’. In seeing so much of Bochner’s work brought together in this new exhibition, it is impossible not to join the artist in his interrogation of these ideologies and accepted ‘truths’. Definitely worth an afternoon’s deep thinking.

Mel Bochner: If the Colour Changes runs until 30th December. 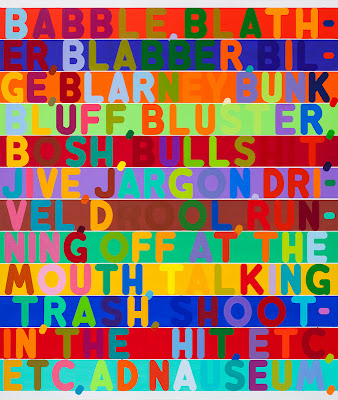 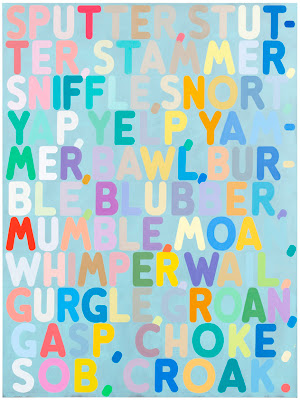 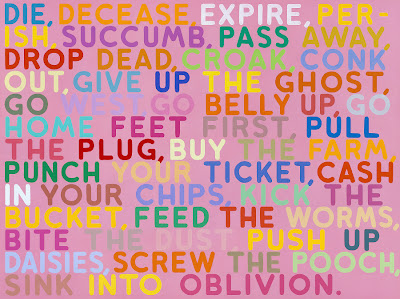 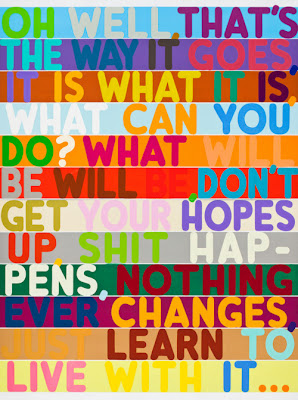 Posted by florence ritter at 15:32