FLORENCE AND THE COLLABORATIVE DRAWING MACHINE

'Often an artist will focus so much on the painting that he forgets he is in the act of painting' muses Michel, in one introduction of The Collaborative Drawing Machine to a group of soon-to-be collaborators at the Worlds Together Conference last month at Tate Modern. The Machine is one of several projects formulated by Brazilian couple Michel Groisman and Gabriela Duvivier which focus upon the performative experience of the self in the act of drawing.  In this work, the process of producing is more important than any finished product, as participants are given the chance to paint 'as one' with seven other people.

The Machine has a DIY aesthetic and is made with modest materials. A tangle of pulley mechanisms, ropes and pipes link up around a large steel frame. Eight emptied plastic milk bottles of paint are hung in pairs at each top corner - three hold the primary colours, two black, three white. All of the components converge in a single needle held a couple of centimetres from the floor.

Simple harnesses are looped around four of the participants who together determine the position of the needle. The other four are given two valves, which, when opened, release paint down to the needle. A higgledy-pigglydy network of rainbow coloured lines snake across the slab of thick paper. A full kaleidoscope of incredible turquoises, emerald greens, clementines and pinks cross, combine and blend; when the needle stops, they pool into psychedelic lakes of colour. 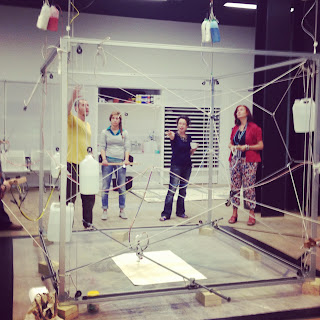 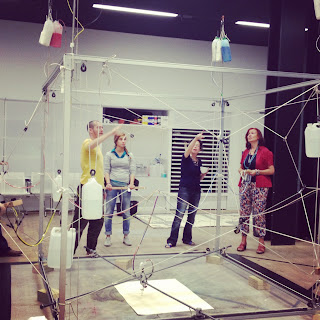 Different groups react differently to the task. Some want to take control of the process by vocalising instructions, others set themselves tasks - attempting a circle was a popular ambition. Most groups however work silently together, deep in concentration and strangely mesmerised by the invention on the floor that they have created in conjunction with the strangers around them. Everyone watches the needle. Only when it stops or the inks stop flowing through some unspoken decision of all of the collaborators do we look up. The spell breaks and we are all in the room again. 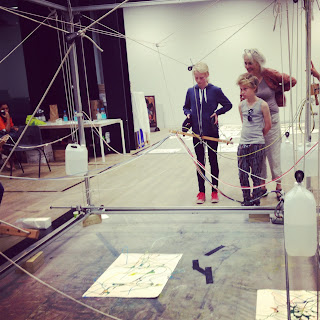 The experience is a deceptively simple one and one that has less to do with drawing than with re-imagining social structures and investigating ways of communication. I asked Michel a few questions about the history of the Machine and the ideas behind it. 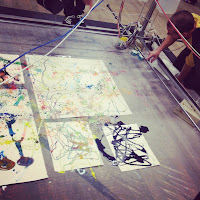 S P E C T A C U L A R U M: How long have you been working on the Machine? To what extent does it relate to other projects or past performances?

MICHEL GROISMAN: It was in 2009 that we began to develop the Machine; since that time it has undergone several changes, both in its appearance and mode of functioning. During this time we also went through transformations, because each time we would find different ways of how to guide the public and different possible games to accomplish with the machine. However, the idea to use the act of drawing as a pretext for playful interaction between people came long before that. Perhaps the first time we tried this was in 2006, using pieces of wood which allowed two or more people to draw together. But this idea of proposing an interaction between people through games started even earlier, with other projects such as Octopus and Help Yourself, games where the purpose is not to win but to have fun in discovering oneself through the relationship with the other.

S P: Which other kinds of art practices would you align your work with? Whose work in particular has served as a strong influence?

M.G: I understand art as a field of self-research and the world. In this sense our greatest influence has been experiments related to art and education, Buddhism and Alexander Technique. To mention some names: John Cage, Chögyam Trungpa, and Keith Johnstone.

S P: What does the future hold for the machine following the conference at Tate? Did you set it up in Paris and will you be using it again in Rio?

M.G: Our participation with the Drawing Machine with the Worlds Together Conference was great! Several people have contacted us asking for some more information, but we have not yet confirmed anything. But as soon as we receive any confirmation you will be the first person we tell!!


Watch this space for updates on Michel and Gabriela’s fantastic projects. I will certainly follow their work with great interest! For now, here are a couple of videos that give a sense of the way in which the Collaborative Drawing Machine was presented at Tate Modern - Michel tinkering with the mechanics of it between drawings, and, throughout the painting process, Gabriele translating Michel's poetic explanations and metaphors from Portuguese. (My particular favourite was his comparison of the experience to a football game ‘…but with eight players...and there's no goal...and nobody loses...’) 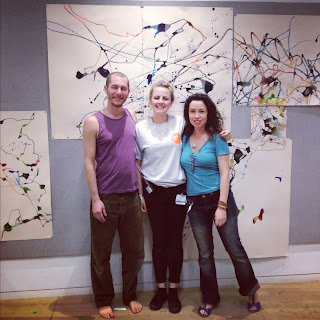 Posted by florence ritter at 08:46