Still Life: An Audience with Henrietta Moraes calls itself ‘a play interweaving text and drawing’. This will presumably appeal to a mixed crowd, who might be divided by their predominating interest in either of these interwoven components. The pull for me, of course, was the drawing  - an hour’s life-drawing for a fiver? Yes please.

Sue MacLaine, originally starting out as a stand-up comic, devised the script for the play which has her speaking as Henrietta Moraes, a ‘bohemian’ of the London hippie scene, friend to Francis Bacon and Lucien Freud. MacLaine delivers a great performance and the script is poetic and at times quite beautiful; her voice chimes over the fervent scratching of pencils and charcoal as she moves deliberately and gracefully between poses.

She often addresses the audience directly – ‘this is a Bacon story, you’ll like this’ – and makes direct eye-contact with her audience as they are drawing, making for a different kind of drawing experience to that which normally takes place in the studio. The piece sets up a curious dynamic between the audience and performer: in actively participating in the show the drawers are able to imagine a more personal relationship with the model, and in turn, themselves as the artists she speaks on on that London scene.

I would thoroughly recommend MacLaine’s piece at Whitespace to both those who can and cannot draw, and to those who have and have not tried life drawing. I found myself switching in and out of the narrative as I drew – Still Life: An Audience... is a multifaceted piece of theatre which can be experienced on different levels.

Go watch, listen to and draw Sue Maclaine as Henrietta Moraes at Whitespace on Gayfield Square, until 27th August. 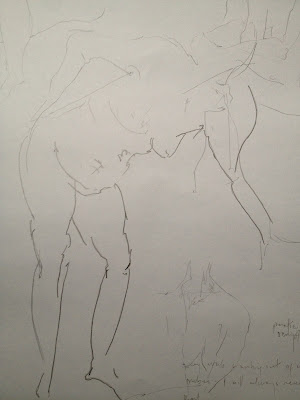 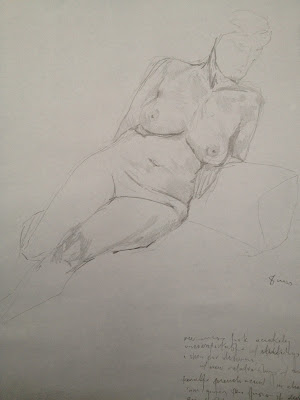 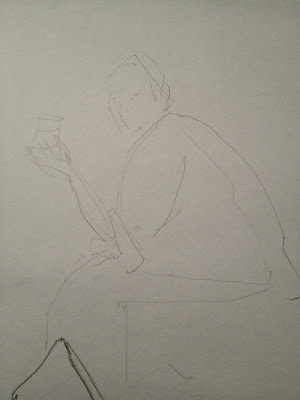 Posted by florence ritter at 10:30