When asked which thread of his many projects he considered most successful in expressing his ideas, Nathan Anthony struggled to find a single answer: ‘I always think it’s the latest thing I’ve done’.  His instinctive response elucidates well his endless ‘learning by doing’ as he darts from one idea to the next with an ever-expanding list of resources and approaches. Windows in a local chapel, sand from Edinburgh beaches, tinned meat, mushrooms, tape cassettes and crumpets are among the disparate subjects amalgamated in his studio space. Each is scrutinised, dissected and reassembled in the creation of new and peculiar forms, revealing or emphasising certain qualities of the original object. Although Anthony looks upon this process as a form of empirical investigation, his work seems to be motivated rather by an insatiable curiosity and delight.
Anthony often unites the organic and the artificial to draw direct comparisons. In one series, wide bands of cheap faux-wood vinyl are used to vacuum-wrap natural logs in a suffocating embrace of plastic; discs of vinyl are stuck to their ends, smothering the natural rings. The horrible artificiality of the wood-print synthetic sheeting seems ludicrously far from the raw, porous wood that it is intended to imitate, and the juxtaposition of the two materials has us contemplate their material properties in a novel and original way. 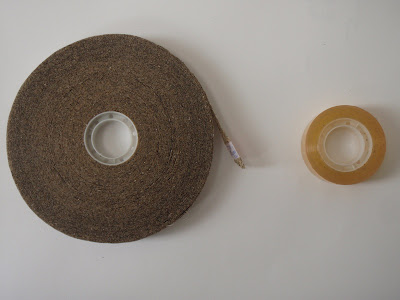 In another untitled piece, Anthony unravels a roll of sticky tape against a sandy beach, to collect grains of sand; he then re-winds the tape onto its plastic wheel: the peculiar sampling method of a meticulous arenophile. The tape, once it is neatly coiled, expands to almost three times its original size choked by layers of minute grains. In themselves, the wafer-thin tape and minuscule grains are inconsiderable, but combined, the two elements have a stronger presence than before. On discovering what exactly we are looking at, our perceptions of both elements shift just slightly, in an amused ‘Oh, yeah!’ of revelation. 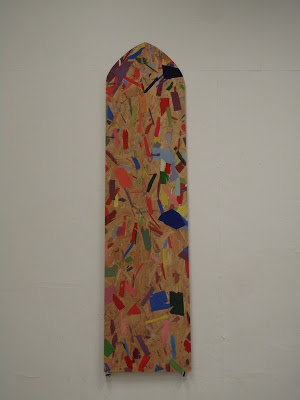 Anthony’s fixations on the properties of SPAM meat (Shoulder-Pork Ham) and of OSB (Ordinary Strand Board, used to cover broken windows), were interesting as in both, natural materials have been pulverised and industrially re-synthesised to form a new solid that is an expanded or altered version of its original form - a process that draws parallels with Anthony’s own artistic processes. OSB interests Anthony for its being ‘almost a contradiction in terms’ as a kind of man-made wood. In another untitled piece, he investigates the multi-faceted identity of materials by playing with our preconceptions of a physical object. He cuts a panel of OSB to the basic shape of a slim Gothic window, and, leaving the majority of the surface bare and exposed, Anthony paints and varnishes certain individual strands or fibres of the board in an aesthetic rainbow of colours which sing out from the base material. Once again, his novel and poetic treatment of form has us re-evaluate the otherwise ordinary, cheap, industrial material. The blocks of varnished acrylic convert in our minds to the sophisticated, rich and revered colours of stained glass windows, and the solid, durable wood, usually a tool in the protection of buildings, suggests the fragile glass of a chapel window: the rarefied object of conservation. Although Anthony insists on the ambiguity of the piece, the immediate and inescapable religious connotations of the work set it apart from the rest of his practice. His decision to hang the piece relatively high on the wall in a recent exhibition at Edinburgh College of Art recalls how Malevich blasphemously exhibited his Black Square in a top corner of the gallery, linking with domestic Russian Orthodox icons.
Originally I thought Anthony’s approach with the OSB window was incongruent with his works in which he focussed on material objecthood, but in fact it can be seen as an extension of his exploration into our perception of objects. He has said repeatedly that he wants interpretation to be ambiguous. In their renewal of our understanding of objects, Anthony’s unexpected transformation of objects has strong parallels with the work of Tom Friedman, although Anthony’s choice of natural materials establishes an organic and lyrical aesthetic that is quite different to that of Friedman’s often glossy finished pieces. For Friedman, ‘Subject and object dissolve into the “suchness” of the thing itself’; Anthony’s selected objects similarly take on an identity of their own within the studio, undergoing transformations that speak of no explicit artistic significance or societal function, but which open our minds to a poetic reconsideration of the objects we see every day.
Posted by florence ritter at 15:37