‘Without certain texts, we have a history that is incomplete, inadequate, distorting and deforming’
-Griselda Pollock talking at the Whitechapel Gallery, London [Dec 2011] 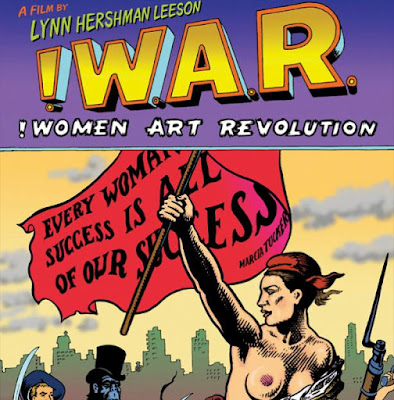 A week or so ago I went along to the Whitechapel Gallery in London for their screening of a new film by Lynn Hershmann Leeson documenting the feminist movement in 1970s United States. Spanning forty years of material, the film includes interviews with Marcia Tucker, Judy Chicago, Joyce Kosloff and Francesca Woodman amongst countless other women (and one lone man). The eye-catching, rather tacky graphics and rousing all-American music might have cheapened this confident manifesto for the visibility of women artists, but for its invaluable content. The film offers a uniquely complex and personal portrait of the women involved in the 1970s revolution and their interrelationships. It well portrays the passion and intellectual rigour behind the body politic and some of the more subversive artworks of the period, which are at risk of losing their power by becoming meaningless icons of the movement, artefacts of a past movement.
In a discussion after the film with Hershman Leeson, Griselda Pollock spoke of the need for the ‘real’ history of the past seventy years to be well documented and collected into a framework from which students can choose to select sources.  It wasn’t so much about finding more women in museums, she argued, but rather about having available resources which students today can draw from. Hershmann Leeson agreed: ‘it is easier for historians to put works away in drawers rather than get to grips with the essence of them. The film’s aim is to push the drawer open’.
Hershmann Leeson's project RAWWAR, in extension of the ideas and aspirations of the film, is a fantastic resource in pushing the drawer wide open. It not only brings together video clips, slides, and interviews from the past, but, in collaboration with youtube, it enables visitors to upload their own material to the site, ensuring its continuation and constant reinvigoration for the present and guaranteeing its documentation for the future.

Definitely worth a look!
Posted by florence ritter at 14:36