Yesterday the London Evening Standard announced the first winners of their Ideas for London competition, in collaboration with ArtAngel, a commissioning body for contemporary artists to create a plethora of brilliant projects and probably my dream workplace. I hadn’t heard of the competition before – I’ll now follow its progress. But the proposal of one winner to tackle the tens of thousands of empty houses in London reminded me of another ArtAngel-funded project I went to see three years ago : Roger Hiorns’s astoundingly original Seizure, which should have earned him the 2009 Turner Prize (he was the clear winner in my eyes that year but somehow lost out to Richard Wright, which I will have to discuss in a later post). 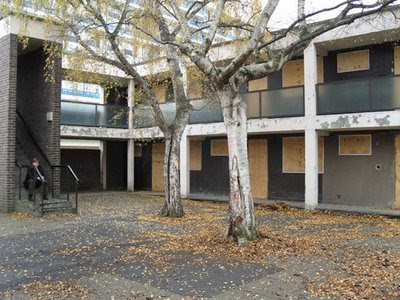 I went to see Seizure on the last weekend it was open to the public. It was easy to find in spite of the unconventional location - a constantly self-replenishing queue of over a hundred people snaked through a run-down courtyard, disappearing into what appeared from the outside to be a small council estate with boarded up windows.
The exterior revealed nothing of what was inside. Hiorns had sealed off every edge of the domestic space and filled it with liquid that slowly drained to leave a thick, even carpet of blue copper sulphate crystals bristled from every wall of the tiny council flat. A dado rail coursing around the walls and a bath in an adjoining room were the only hints to the domesticity of the original building. Visitors, picking their way gingerly across the uneven floor, took care not to knock the seemingly delicate crystals but they were unexpectedly hard. With this knowledge of the piece’s tactility and durability, the space suddenly became less of a romantic or fairytale grotto as some critics called it but a natural environment in itself; the crags and peaks of the crystals were like mountains in miniature, all in an incredible, dark acidic blue. 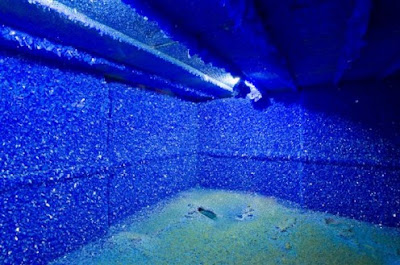 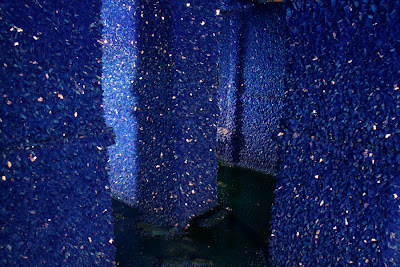 ArtAngel’s support this year of a social project to bring empty properties back to use draws interesting parallels with their commissioning of Hiorns’s aestheticising of an abandoned property, and rendering it absolutely uninhabitable. I’d like to know what has happened to the crystals of Seizure – maybe I’ll try to revisit it.