Super-charming duo Reed and Rader this week came over to London for the first time to stage an exhibition at trendy Prote.in HQ 18 Hewett Street. The New York duo famed for their bright, glitchy GIFs refashioned  the East London location as a prehistoric party house, staging large-scale projections and sound and video works in a space populated on- and off-screen by…dinosaurs. Around their prehistoric/futuristic GIFs, they lined the white gallery walls with paper cut-out grass and tropical plants, and imported over from New York a massive paper dinosaur friend. The opening night was a dino-extravaganza with videogame-graphics, dancing and dining on the digital artists’ favourite food – pizza – served up wood-fired style from bespoke street food company Bosco and Bee. 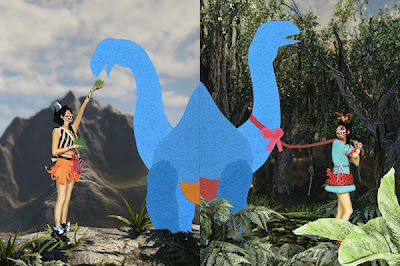 Reed and Rader’s work is undeniably, unapologetically fun. They push the GIF, perhaps the first real art form of the internet, to its faux-futuristic limits, creating dynamic and deadpan imagery that never takes itself too seriously. Inherent in their work is a bittersweet nostalgia for the simple pleasures of the early internet age – the happy-go-lucky Moldy Peaches era when Pokémon cards and Gameboys, pizza, kitties and cartoons were king.
And yet, beyond their spacey amusements-arcade of imagery there is the potential for more serious discussions about the ways in which new technologies are to direct the future of art and art-making. Just as the prehistoric, the nostalgic and the futuristic are jumbled in this new exhibition, so are the categories of fashion, advertising, technology and art, converging to form a new breed of post-Pop art. Reed and Rader don’t only question the boundaries of ‘high’ and ‘low’ art but disregard them all together - with the irresistible audacity of teenagers. Cretaceous Returns is only on for a week: catch the duo and their dinosaurs before they party on back over the Atlantic. Their show at 18 Hewitt Street runs from 8th – 20th November.

(adapted from an article for The Cultural Expose)


When I spoke to Matthew Rader about what I was writing, I discovered that he hadn't actually heard of the Moldy Peaches (?!) The photographer at the preview apparently caught me harping on about them to him. 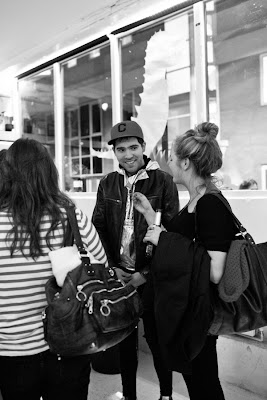 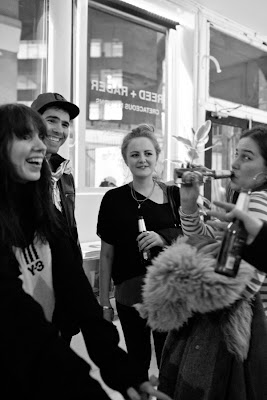 Posted by florence ritter at 13:34